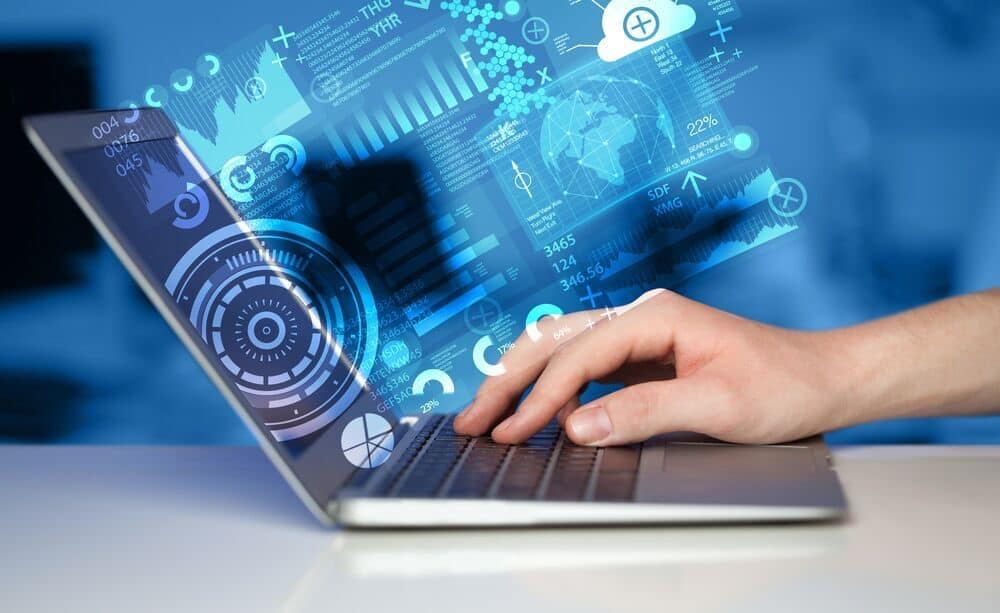 Logistic regression is used to predict a discrete outcome based on variables which may be discrete, continuous or mixed. Thus, when the dependent variable has two or more discrete outcomes, logistic regression is a commonly used technique. The outcome could be in the form of Yes / No, 1 / 0, True / False, High/Low, given a set of independent variables.

Human Resources: The HR manager of a company wants to predict the absenteeism pattern of his employees based on their individual characteristic.

Finance: A bank wants to predict if his customers would default based on the previous transactions and history.
Types of logistic regression 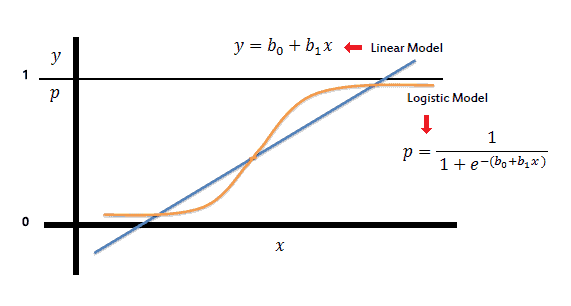 P is the probability of the event

In is the natural log (to the base e)

Logit is also denoted as Ln

So, the final logistic regression model formula is

Unlike linear regression, the logit is not normally distributed and the variance is not constant. Therefore, logistic regression requires a more computationally complex estimation method named as Method of Maximum Likelihood (ML) to estimate the parameters. ML obtains the model coefficients that relate predictors to the target. After this initial function is estimated, the process is repeated until LL (Log Likelihood) does not change significantly.

The data which has been used is Bankloan. The dataset has 850 rows and 9 columns. (age, education, employment, address, income, debtinc, creddebt, othdebt, default). The dependent variable is default (Defaulted and Not Defaulted).

Let’s first load and check the head of data.

Now, making the subset of the data with 700 rows.

Let’s have a sample of 500 values. So, creating a variable of training data of 700 rows.

Now, let’s fit the model. Be sure to specify the parameter family=binomial in the glm() function. 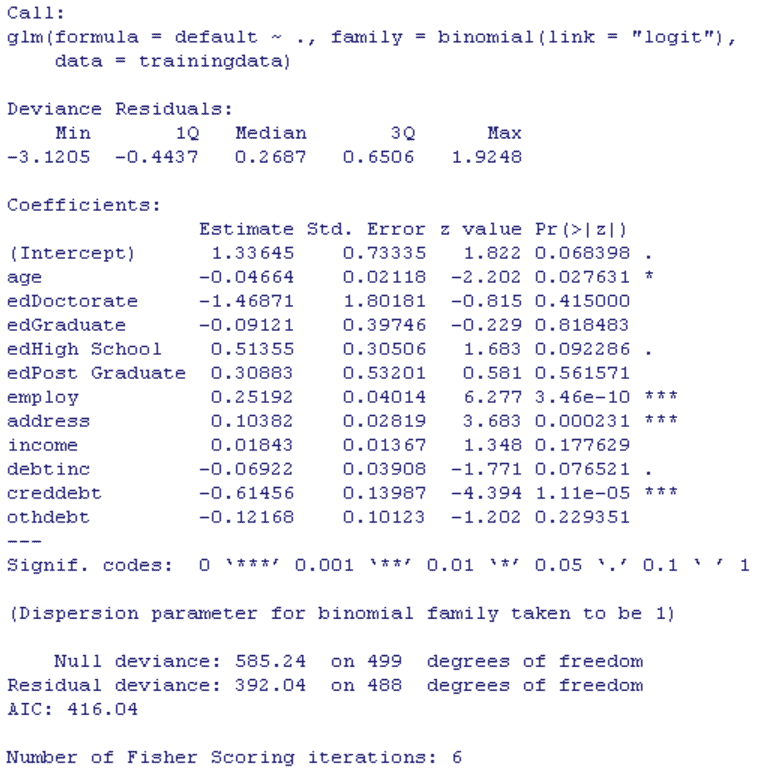 In our model, only age, employment, address and creddebt seems to be significant. So, building another model with only these variables. 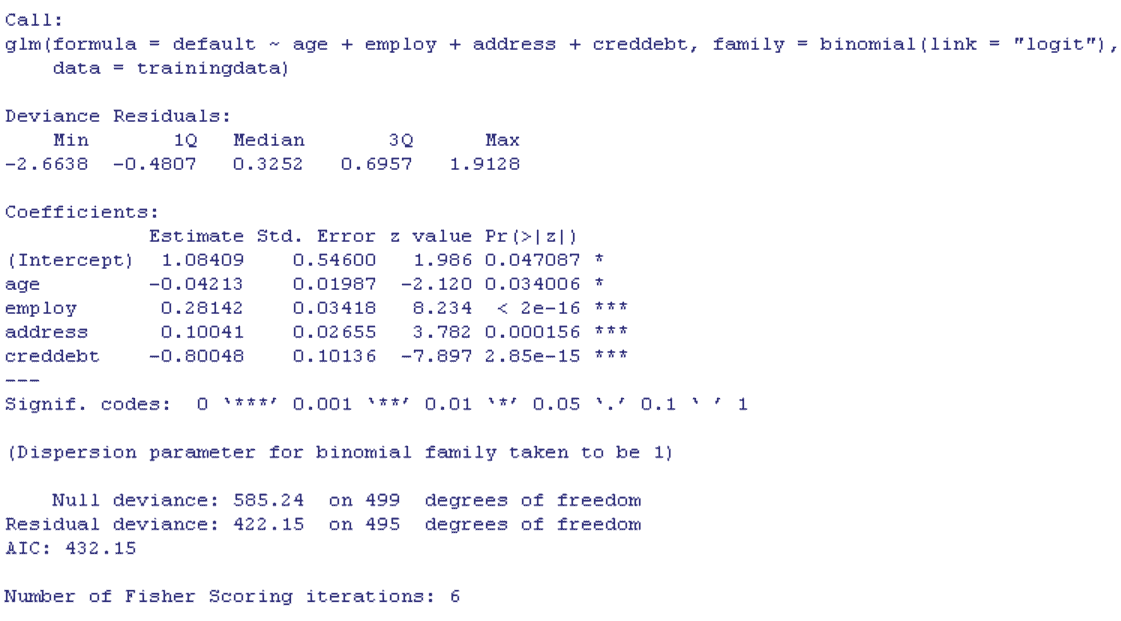 Let’s now predict the model with the training data.

Now looking at the probability with 0.5% flight delayed or ontime.

Creating a table to see the same.

This is also known as confusion matrix. It is a tabular representation of Actual vs Predicted values. This helps us to find the accuracy or error of the model and avoid overfitting.

Going ahead, lets test the model on testing data.

Now, we can plot this in Receiver Operating Characteristics Curve (commonly known as ROC curve). In R, it can be done by downloading a package called ROCR. An output of the plot is given below.

ROC traces the percentage of true positives accurately predicted by a given logit model as the prediction probability cutoff is lowered from 1 to 0. For a perfect model, as the cutoff is lowered, it should mark more of actual 1’s as positives and lesser of actual 0’s as 1’s. The area under curve, known as index of accuracy is a performance metric for the curve. Higher the area under curve, better the prediction power of the model. 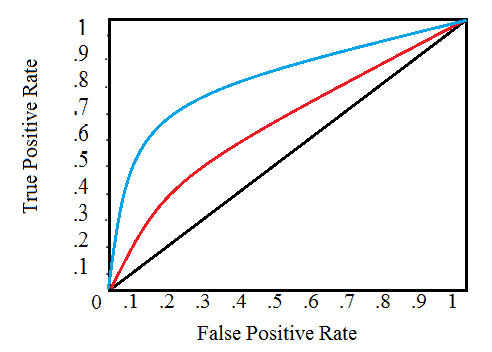 Logistic regression is a widely used supervised machine learning technique. It is one of the best tools used by statisticians, researchers and data scientists in predictive analytics. The assumptions for logistic regression are mostly similar to that of multiple regression except that the dependent variable should be discrete. Most of the data science students struggled to learn this technique, which is why I am pleased to present you a basic introduction to help you grasp the topic. As I always say “the sky is the limit”, and the internet is your best friend ?, go ahead… and start your learning journey. All the best.

Acquire this Domain
You can acquire this site’s domain name! We have nurtured its online marketing value by systematically curating this site by the domain’s relevant keywords. Explore our content network – you can advertise on each or rent vs. buy the domain. Buy@TLDtraders.com | Skype: TLDtraders | +1 (475) BUY-NAME (289 – 6263). Thousands search by this site’s exact keyword domain name! Most are sent here because search engines often love the keyword. This domain can be your 24/7 lead generator! If you own it, you could capture a large amount of online traffic for your niche. Stop wasting money on ads. Instead, buy this domain to gain a long-term marketing asset. If you can’t afford to buy then you can rent the domain.

About Us
We are Internet Investors, Developers, and Franchisers – operating a content network of several thousand sites while federating 100+ eCommerce and SaaS startups. With our proprietary “inverted incubation” model, we leverage a portfolio of $100M in valued domains to impact online trends, traffic, and transactions. We use robotic process automation, machine learning, and other proprietary approaches to power our content network. Contact us to learn how we can help you with your online marketing and/or site maintenance.

This website uses cookies to improve your experience while you navigate through the website. Out of these cookies, the cookies that are categorized as necessary are stored on your browser as they are essential for the working of basic functionalities of the website. We also use third-party cookies that help us analyze and understand how you use this website. These cookies will be stored in your browser only with your consent. You also have the option to opt-out of these cookies. But opting out of some of these cookies may have an effect on your browsing experience.
Necessary Always Enabled
Necessary cookies are absolutely essential for the website to function properly. This category only includes cookies that ensures basic functionalities and security features of the website. These cookies do not store any personal information.
Non-necessary
Any cookies that may not be particularly necessary for the website to function and is used specifically to collect user personal data via analytics, ads, other embedded contents are termed as non-necessary cookies. It is mandatory to procure user consent prior to running these cookies on your website.
SAVE & ACCEPT
Generated by Feedzy